Its main square resembles a village and you can go to the beach on your lunch break. Here’s why you should be packing your bags for a move to Barcelona.

A cosmopolitan city with a truly unique sense of personal identity.

Barcelona is the capital of the Catalonia region in Spain.

Each looking to grab a slice of its famous architecture, stunning shopping plazas and exuberant nightlife.

Many are now looking to extend their stay and take advantage of the affordable real estate, lower cost of living and the laidback lifestyle on offer.

Read 15 reasons why White & Company believes you should join them and how it can help you achieve your goal of moving to Barcelona in 2019. 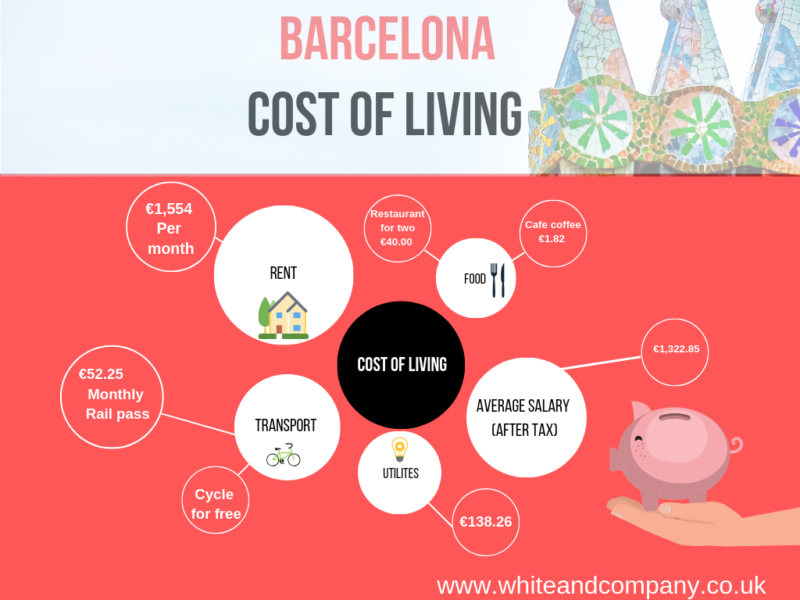 Many expats move to Barcelona to take advantage of the lower cost of living on offer:

A recent Expat Insider Survey found expats in Barcelona were the happiest in the world.

The city came first in the Personal Happiness subcategory. In fact, 64 percent are overall satisfied with their work-life balance.

Move to Barcelona from the UK and you can expect your exposure to sunlight to dial up more than 70%.

Temperatures cool to around 16 degrees over the winter months of December through February.

Ask Catalans what’s the biggest advantage Barcelona has over Madrid and they are sure to say one of two things: either it’s football team or its beaches.

We can’t measure the benefit of its football team to expats but what we can say is that it has got more beautiful beaches within its city confines than most countries have.

Many people head to the beach after work to unwind and have a cheeky cerveza. It’s also great for taking children out to have fun building sandcastles and swimming in the sea.

Barcelona came top of all Spanish cities in terms of leisure activities.

There are various tennis, golf and cycling clubs to get involved with. The large number of beaches also makes water sports a popular pastime for many Catalans.

Why waste all those hours of sunshine after all?

Those families moving to Barcelona who are concerned about schools can rest assured that their child will receive an excellent education at one of Barcelona’s international schools.

Schools follow an international curriculum that is transferrable to other countries, including the UK.

Standards are so high in fact that the vast majority of students are Spanish with locals also looking to send their children to these schools.

Barcelona is a melting pot of different cultures.

El Raval in the old city is a family friendly neighbourhood where expats from different European nations converse over paella and some beers after work.

With so many expat groups to choose from you’ll never be short of opportunities to socialise.

The fiestas de Gracia held in the third week of August is the most well-known with epic decorations, traditional Catalan circle dancing, live music and plenty more.

Many of Barcelona’s districts evolved from older villages and locals still think of it in this way. It’s not uncommon to hear someone talk of “going into Barcelona”.

Gràcia is one such neighbourhood. Popular with families and young professionals alike, Gràcia is a trendy and vibrant area where people mingle and converse effortlessly, often in the Park Güell.

In addition to the Park Güell you can see the marks left by famous architect Antoni Gaudí all over the city.

From La Sagrada Familia cathedral in the heart of Barcelona to many lesser known works scattered throughout the city, Gaudi’s work is testament to the creativity of the city.

If city life is not what you’re looking for but you still need to work why not hit the suburbs?

Maresme is a hidden gem in the suburbs with endless stretches of beaches, three golf clubs and vineyards it’s not hard to see why so many expats are looking to set up camp on the Catalan coast.

If you need to commute into the city for work it’s only 25 minutes by car as well!

Enjoying this post? Try reading: Move To Spain From UK – 19 Things You Need To Know

Move to Barcelona and you’ll never be far away from a plaza.

Each has its own character with some sporting large open terraces perfect for conducting business deals over lunch or just catching up with friends over lunch or a meal.

Plaza Catalunya is a shopping paradise with everything from large department stores to small confectionaries and food markets serving up a selection of ham, cheese, wine and fruit.

The cuisine in Barcelona caters for a Mediterranean diet consisting largely of fresh vegetables, bread, pasta, legumes, fish and lots of olive oil.

Tapas anyone? Eating out is a social affair in Barcelona.

Don’t be surprised to find yourself trying out various dishes over conversation and good coffee.

Don’t want to spend your weekend cooped up in the city?

Barcelona is a densely packed city and if you’re feeling the heat it’s easy to escape to the Catalan countryside, either by car or train.

Weekends in the Pyrenees – the spectacular mountain range that splits France and Spain, with Andorra in between – are a popular pastime for Catalans.

Ditch the car for a bicycle

If you’re fed up with packed commuter trains and endless delays then Barcelona will be a breath of fresh air (literally).

It is a lesser known fact that bicycle is the most popular means of transport in Barcelona.

The cityscape is designed in such a way as to make the experience safe and affordable for cyclists riding to work or just for pleasure.

How can White and Company assist?

Planning to move to Barcelona in the near future? Here’s just a few reasons why you should consider White & Company as your designated removals specialist:

We offer weekly removals services to and from Barcelona.

This includes either full load consignments from point A to B, or part loads that are delivered shortly after your arrival.

Whether you’re moving to the Ciutat Vella (the city centre) or the quieter suburbs we will ensure your belongings arrive safely without disruption.

What are you waiting for? Give us a call today or fill out a quick quote form to see how we can get your dream move to Barcelona underway.