Nationwide removals company, White & Company has successfully acquired a fleet of six lightweight low floor Luton vans, fit to the Boxer Euro 6 specification, as the firm looks to step up its national operation.

The low floor Luton vans, which are manufactured by Peugeot, are the latest in a long line of quality light commercial vehicles popular with the removals industry. 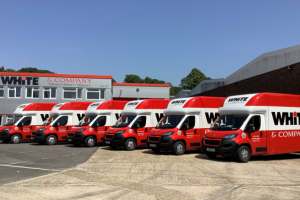 The vans have been bespoke designed to fit the company’s red and white colour scheme with the White & Company crest and British Association of Removers logo emblazoned on the side.

They are fitted with the latest fuel saving technology in the form of BlueHDi diesel engines that give combined cycle fuel economy of up to 47mpg.

Using this technology emissions of CO2 are cut by as much as 30g/km to 154g/km in the same mid-range version.

“It’s such a good-sized, practical vehicle and you can still get quite a lot in them. They are also low at the back which means it’s safer and easier for our crews to step on and off the back.”

Another added benefit of the light-weight vans is that drivers do not require a HGV licence to drive them, something that gives the company more flexibility, says Lynne.

She added: “You can drive these vehicles on a usual drivers’ licence which really frees up the availability of staff to drive them.”

White and Company is a UK-based removals company which has evolved from humble beginnings in Portsmouth to become a global player in the removals industry.

The company now has 19 locations throughout the UK, owns over 240 vehicles and employs more than 450 full trained staff.

We are founder members of the British Association of Removers, the official voice of the removals industry in the UK, as well as being accredited members of the FIDI and OMNI international relocation networks.

For more information on our services call 01489854275 or email hq@whiteandcompany.co.uk.