Why should you move to Melbourne from the UK? Here’s just a few of the reasons why now is a great time to relocate to Australia.

Before Vienna sniped its crown this year, Melbourne had been named by The Economist as the most liveable city for seven years in a row! (it’s now second).

Most UK families will be familiar with Melbourne through its depiction as Ramsey Street in the popular daytime soap, Neighbours.

But Kylie and Jason have come a long way since Neighbours and so has Melbourne.

Melbourne’s diverse economy has helped position it as a truly global city with world class attractions and a high quality of life.

We take a closer look at why a move to Melbourne, Australia’s fastest developing city could be just what you’ve been looking for:

Move over Sydney, Melbourne is set to become Australia’s largest city and the headquarters of the nation’s thriving economy.

Many large multinationals are based in the CBD and job transfers from the UK are possible.

There are also lots of opportunities for those with a trade, such as Diesel Mechanics, plumbers and welders.

There is currently demand for jobs in the following fields: 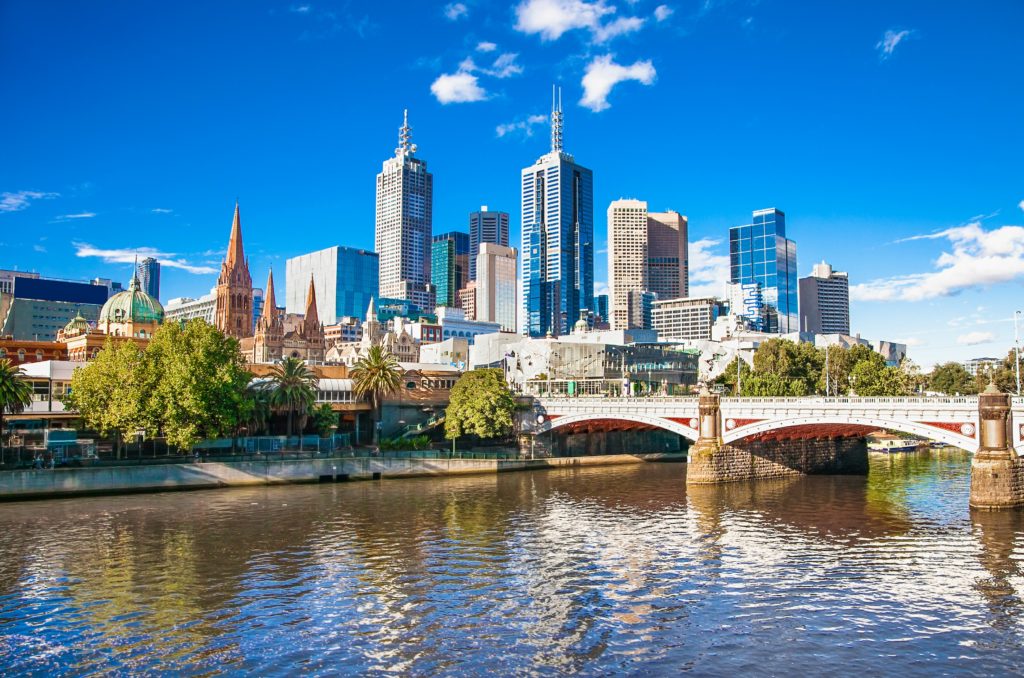 It might come as no surprise to know Melbourne is cheaper than London when it comes to a lot of things.

In fact, according to the cost of living index, Numbeo, rent is 40% lower in Melbourne if you’re currently living in London.

Getting about is cheaper too, with a litre of petrol just 63p.

Eating out in a standard restaurant in Melbourne costs just AUS $16.50 (£9), 39% cheaper than London and childcare is 15% cheaper than Southampton.

There are more than 200 public and private hospitals located across Melbourne and regional Victoria.

Medicare provides free or subsidised access to Melbourne’s state of the art hospitals and pharmaceuticals.

Melbourne is one of the most expensive places to buy property in Australia, alongside it’s sister city Sydney.

However, depending on where you are moving from in the UK, many people are surprised to see just how much more affordable it is.

Fed up with packed morning trains with every man and his dog on it?

You can use a myki pass (similar to an Oyster card in London) to get around all corners of the city 24/7 and the suburbs at very little cost.

If you move to Melbourne from the UK you can expect to see a lot less of pollution.

Not only does the brilliant transport system mean there’s less need for a car but the city is beautifully designed with no shortage of parks and green spaces.

To the east of Melbourne are the Fitzroy Gardens, a lovely place for a stroll with a coffee on your work break or a family picnic.

It’s also where you can find one of the most historic buildings in Australia, Captain Cook’s Cottage.

It’s a cliché to say lots of Brits move to Melbourne to escape the weather but it doesn’t make it any less true.

However, many Brits enjoy the ‘four seasons in a day’ weather which can see it rain one minute and then be blisteringly hot the next.

You might take in a rain jacket to work but by the end of the day find yourself down to just one layer as the evening sunshine comes out.

Enjoying this post? Try reading: Shipping to Australia: Five Things You Absolutely Must Do Before You Go

Another reasons lots of families move to Melbourne is the schools.

Melbourne scored 100% for education from the Economist’s Global Liveability Survey 2018. Two of the cities’ universities rank in the top 100 global universities.

State schools are open to expats and anyone living in Australia with a permanent residency visa can send their children to a state school at no cost to themselves.

Your child can expect a first class education with varied tuition and opportunities for outdoor learning.

Melbourne is Australia’s sporting capital and is home to the country’s largest sports stadium.

The Australian Open tennis tournament is held in Melbourne every January where you can see the likes of Roger Federer, Raphael Nadal and Novak Djokovic.

If you don’t’ fancy living in the heart of the CBD, Melbourne is home to some plush suburbs, close to the beach.

Port Melbourne and Brighton are popular suburbs to move to and escape the hustle and bustle of the city.

As is St Kilda, where backpackers, families and joggers congregate on the Esplanade, and yachts and windsurfers can be seen on the horizon.

From Melbourne you can explore either the rest of Australia or further afield.

A drive on the Great Ocean Road takes you to Adelaide, in the south of Australia. Or grab a cheap flight to Perth, Sydney or Brisbane through Jetstar, Tigerair, or Virgin Australia.

You can also fly to New Zealand in 3 and a half hours, or venture further afield to Asia to see the likes of Singapore, Thailand and Vietnam.

If worrying that leaving the UK means you’ll miss out on good food and socialising, don’t.

Melbourne is home to plenty of excellent rooftop bars and award-winning restaurants.

For Italian food head to Lygon Street, Fitzroy for Spanish or Richmond for Vietnamese.

Melbourne offers an outdoors lifestyle that many can only dream of in the UK.

With beaches close to the city and various opportunities to surf, swim or simply have a BBQ with friends, what’s not to like?

Move to Melbourne with White and Company

If all this sounds like something you want to be part of White and Company can help.

Are you moving to Australia and require a removals company to advise and transport your goods?

White & Company have been providing a full removals and storage service to Australia for the past eighty years.

As founder members of BAR, FIDI & OMNI, White & Company can carry out full or part loads from the UK to Australia.

Moving to Melbourne: The Process

We can arrange a free no obligation quotation, carried out by one of our qualified surveyors. They will be able to answer any of the questions and concerns you may have.

The surveyor will undertake a thorough survey to determine the volume of effects you will be shipping to Australia and present you with quote.

Once accepted the vehicle and removal team can get to work.

The removal team will export pack and wrap all items being shipped in special breathable bubble wrap.

All effects are transferred to the export warehouse to await loading into a 20ft or 40ft container.

The container is booked with the shipping line onto the first available vessel destined to the closest port of entry to your final destination.

So what are you waiting for? Read to move to Melbourne and start your new life down under?

Give us a call using the number listed above, or fill out a quick quote form and we’ll be in touch as soon as possible.